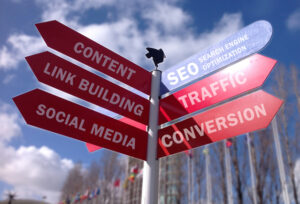 How Does Social Media Work With SEO?

Social Media V SEO – How Does It Compete?

Social media V SEO, how do they work together or compete?

Social media and search used to be two separate beasts.

Two things that were in their own spheres doing two separate things.  However, now social media marketing sites are being read by search engines, they play a big part in the whole optimisation arsenal.

It was only recently that search engines started to read and take note of social media sites such as Twitter, Facebook and all the alternatives.

The reason was because of the massive amount of information and traffic social media sites were getting, it was crazy for search engines not to get involved.

They did used to monitor and take note of them in the early days (assuming they would fizzle out).

But as the social scene grew, they started to read them and index them also. Google now has an algorithm to read pictures and map users from the pictures they load.

What Does This Mean For Business?

SEO V social media and what it means for your business.

Due to the fact that social media sites are being read and indexed, it is important for businesses to be active on social media.

Search engines can tell the difference between self promotion and media buzz.

So businesses that are tweeting about themselves and flagged, and ones that are mentioned by others and in the limelight are flagged as something different.

If your business is not making use of social media, then you are missing out on an important SEO channel.

How Much Does It Cost?

Like much of optimisation work; there is no direct cost.

However the downside is that it takes time (like any search practice).

SEO costs only kick in when you use an agency.

The issue with social media is that it requires constant interaction.

Companies have to update twitter/facebook/other sites they are on on daily and interact with their social community in order to build their networks.

There are specialist marketing companies that will take control of your social media and handle all Facebook updates, Tweets etc.

Social Media Vs SEO – How Do I Get Involved?

Social networking is one area that does not require the involvement of an optimisation expert.

Just go to the social media site that is of interest, and get going.

View the directory of SEO agencies.
Get 5 free quotes.
GET 5 FREE QUOTES.
FILL OUT OUR FORM NOW...