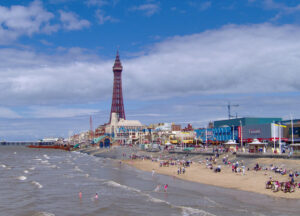 With over 10 PR agencies in Blackpool there are options.  Many of which are smaller consultancies that work from rented offices around Blackpool, or freelancers working from home.

Blackpool does have around 30 marketing companies that can provide public relations support as part of a broader package of marketing services.  Services such as web development, advertising and SEO, for larger companies that need a wider support for their marketing.  There are also agencies that focus on specific industry sectors.  If you needed web support, there  are a number of website designers local to Blackpool that could help.

As Blackpool is quite a small seaside town, many agencies have set in larger towns and cities such as Liverpool or Manchester.

Just fill in the form to get free advice and quotes from 5 local PR agencies in the town that know your industry sector.

For businesses that are based in and around the Blackpool, it obviously makes good practical sense to work with someone who is local.  Rather than an agency that is based miles away in Manchester, Liverpool or even London.

Meetings and personal contact play an important role not just in the communication process, but also in terms of  getting value for money.

PR companies are more likely to work harder for you, and push for results harder, if they are meeting you regularly.  If they have to explain face to face how they are progressing with your campaign.

Review meetings  are such an important part of getting an effective and efficient campaign up and running.  To ensure that what is being represented is what you want, to ‘brain storm’ ideas, as well as to review the agency’s progress.  To access whether they are achieving good returns on investment, and good coverage for your business.

When selecting a company, consideration needs to be given to their experience.  Do they know your market? have they worked with similar companies as yours in the past? and do they know the media publications?

All PR agencies in Blackpool have their own experience.  It might be in the medical sector, engineering, FMCG or travel, so choosing one that is familiar with your sector/services is very important.  By having a meeting, this can be established to ensure they know what they are talking about.

Some PR agencies in Blackpool may make claims on their websites, about their experience.  The multi-faceted talents of their staff,  large offices, being award winning, that are not entirely true.  So meeting them and double checking that they are not a youth working from their bedroom in a far away land is reassuring.

All PR agencies in Blackpool set their own rates, there are no standard rates for firms in the UK.

Generally speaking, the larger the agency, the higher their fees are likely to be.  As they have more staff, more directors, more company cars, bigger offices and higher profit margins.  Freelancers tend to charge less as they have less costs.

Finding a local agency that knows your industry is important.  But so to is comparing quotes, no-one likes overpaying and if you can get the same quality for 40% less, it is worth comparing PR prices from local experts.

Blackpool is a large seaside town in the West of England, just north of Liverpool with a population of around 150,000 according to government statistics.

It is famous for its bracing air, its Pleasure Beach, its pier, its rock, its Tower, and since Victorian times has remained a popular seaside resort.

Blackpool Tower was first opened to the public on 14th May 1894,  being styled on the Eiffel Tower in Paris.  The tower is 158m high and is a grade 1 listed building.

When the then major (John Bickerstaffe) visited The Great Exhibition in Paris during 1889 he wanted a landmark that could inspire as much as the Eiffel Tower.

During the Second World War, the crows nest was removed so the tower could act as a radar station, but this proved unsuccessful.

The tower was kept in the Bickerstaffe family until 1964 when it was sold to EMI.  The tower is now owned by Blackpool County Council who bought it in 2010 from Trevor Hemmings.

The Pleasure Beach is a privately owned family business, owned by the Thompson Family.  It has over 5.5 million visitors a year and is the most visited amusement park in the UK, and in the top 20 in the world.

It was started in 1896 by Alderman William George Bean, after he failed in advertising in New York.  In 1903 he purchased 30 acres of land in order to make adults feel like children again, and was it ever a success?

In 1923 some 44 acres of land was reclaimed from the sea, and the park was moved to its present location.

In 1929, William died of pneumonia and left the beach to his daughter, Lillian, who was married to a businessman called Leonard Thompson.  He took over the business and it still remains with the family.